The Truth About Why You Keep Procrastinating 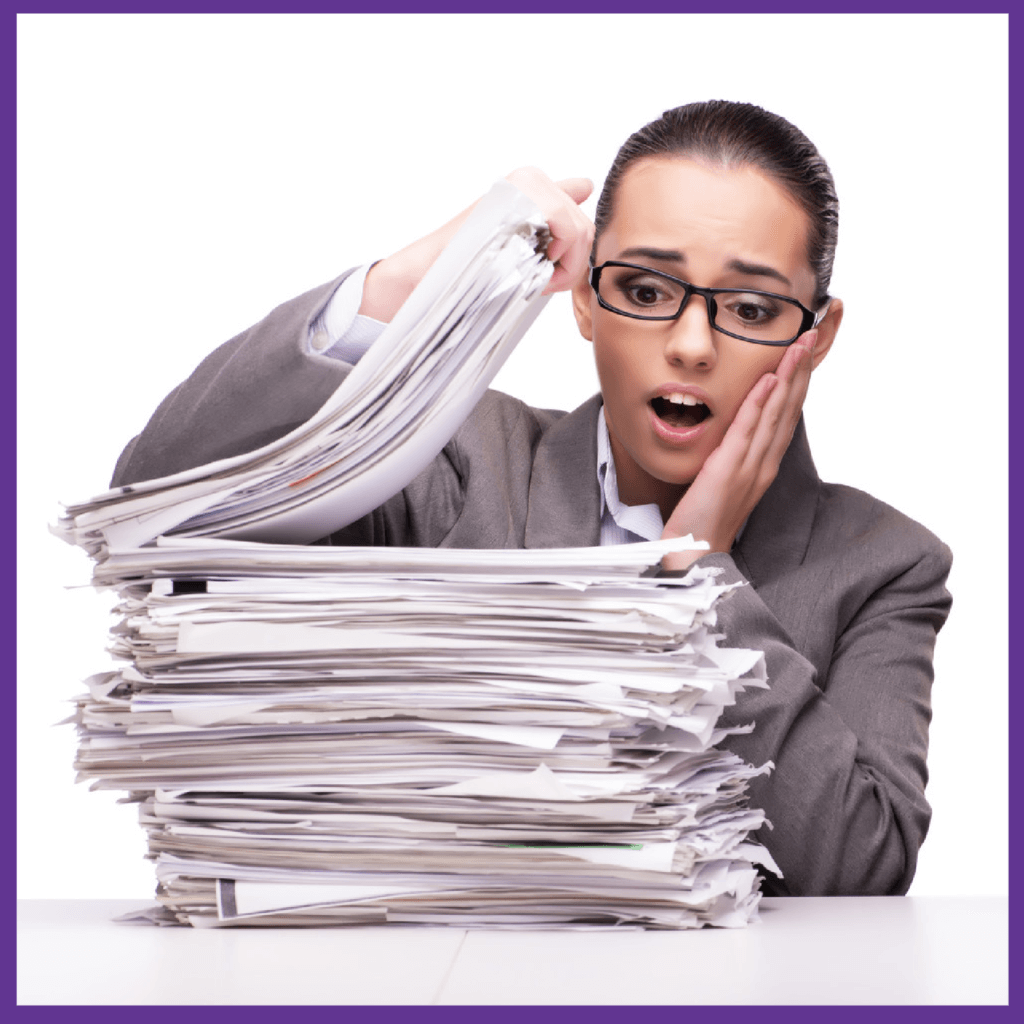 Saving for retirement provides a concrete example of what procrastinating costs you. It’s no secret that the earlier you start saving for retirement, the better off you’ll be. Starting early and setting aside a small amount of money consistently adds up through the magic of compound interest. Take a look at what I mean: 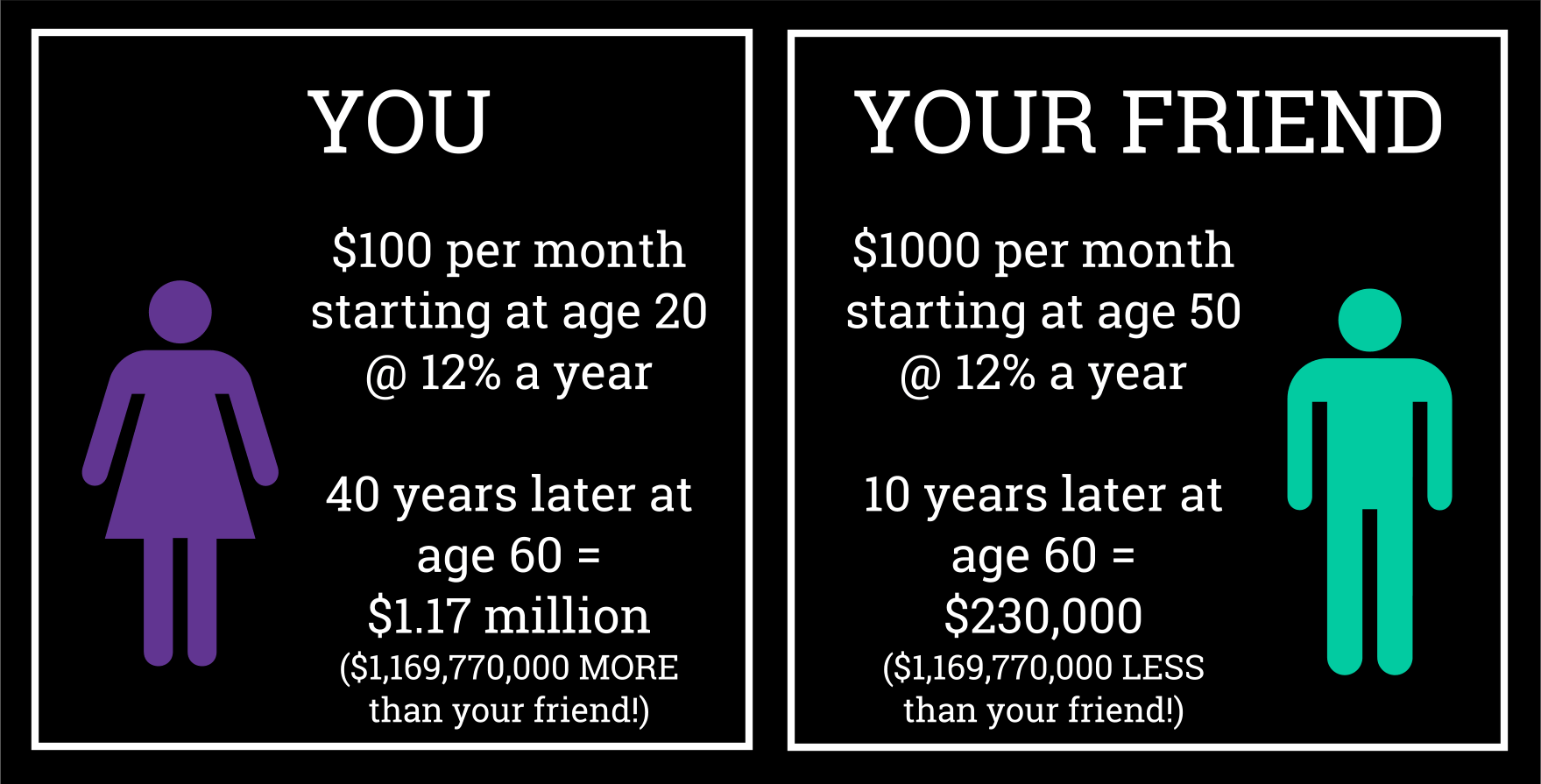 Now there are a host of reasons why people don’t begin saving for retirement when they are twenty including, being in college, loans to pay off, entry level jobs with low pay, and the feeling that you have all the time in the world. However, when you put off saving for retirement, you cheat your future self!

That very same principle applies to the other tasks that we procrastinate at. Tasks like…

Saving for retirement when you are twenty means postponing some pleasure now so that you can reap the reward of more money later. That takes self-control and patience.

Procrastinating is really about not taking action! That gap creates unnecessary stress. It also stirs up fear and negative feelings like guilt, shame, and anxiety.

So why do we put things off?

There are two reasons:

If you want to tackle your procrastination problem, you have to improve your ability to…

In order to push through and do the hard or unpleasant tasks you must be able to manage you!

There’s a reason why you are procrastinating. You believe there is some kind of reward to NOT taking action.

In the past, I procrastinated like a pro when it came to bookkeeping. When I challenged myself to explore what the payoff was for me, I realized that by putting it off I was avoiding the possibility that I would make mistakes. My perfectionist side was kicking in, which is often the case when it comes to procrastinating.

Fear’s favorite trick: to keep you procrastinating. Fear’s secret: whatever you are trying to avoid by putting that thing off is exactly what you will bump into!

Maybe it’s fear of failure, fear of the unknown, or fear of something new. The remedy to fear: taking action – even baby steps! You have to desensitize the fear.

I admit that bookkeeping is not my strength. I’ve made more than a few bookkeeping mistakes, causing me to put off doing a task for fear that I might “fail” at again! Funny thing – by postponing my bookkeeping task I was…failing!

Maybe your Fear Monster at work. If so, the only way to overcome it is to lean into who God created you to be. If you don’t know who that is, I encourage to figure that out.

By procrastinating, you are avoiding a feeling – a feeling you don’t want to feel.

If I had to pick a feeling for putting off bookkeeping it would be stupid. I didn’t want to feel that way. The truth is that I don’t have to be smart about everything, in fact, we all have strengths and weaknesses.

Bookkeeping actually got more difficult when I put it off. Trying to go back and piece together details after the fact actually increased the odds that I would make mistakes – and the vicious cycle continued!

Once I recognized those feelings and tackled the bookkeeping anyway, it was empowering! I discovered it was not the huge job I’d imagined. In fact, it wasn’t even worthy of passing it on to a virtual assistant.

When a task feels negative why wouldn’t you dread it?

In order to move forward and begin to make progress on the backed up bookkeeping I needed to think about it in a new way. My dread subsided significantly when I chose to be grateful for having multiple businesses that required bookkeeping and recognizing that God was abundantly and faithfully providing for my family. Thankfully, my work includes so many others tasks that I absolutely love! Believe it or not, I appreciated all I’d learned from my previous bookkeeping errors.

Re-framing bookkeeping turned a dreaded chore into a more of a happy challenge. That small tweak made a big difference!

Challenge yourself to re-frame what you’ve been putting off. Choose to search for the positives.

The bigger the task, the more difficult it is to know where to begin. That alone will cause you to procrastinate. Getting started – that’s the hardest part!

After letting the bookkeeping pile up, I estimated that I had about ten hours of bookkeeping to catch up on which felt like a lot! Breaking it down into ten one-hour blocks made it feel so much more manageable – something I could easily chip away at.

To begin to break it down, list all the steps involved – everything you can think of right now. They don’t have to be in order, and the list doesn’t have to be complete. You can always add or remove items later. You may even want to plot the tasks on a calendar to help.

Once you’re gotten started you will be surprised at the momentum you’ve created, which will make it so much easier to keep going!

Whatever you’ve been putting off, break it down. Here’s the good news – It actually took less time than I anticipated to catch up on my bookkeeping. And I’ve successfully stayed on top if for years! It now just takes 30 minutes once a week and is so much simpler than when I let it stack up!

Procrastinating is more likely when you lack what you need to complete a task, and yet we often don’t slow down long enough to think that through. Do you need…

7. How Realistic Are You?

Unrealistic expectations are your enemy!

If you expect perfection, disappointment is certain.

Expecting to do it ALL – that will wear you out!

Doubting you’ve got what it takes – well, you will never know until you try!

Expecting to accomplish that task like so-and-so – that won’t allow you to put your unique and wonderful spin on it!

Trying counts! Acknowledge your efforts! Mistakes are not the end of the world! They are the beginning of learning and the chance for a fresh start. In fact, it’s tough to accomplish anything noteworthy without making mistakes along the way!

When my bookkeeping got backed-up, I needed God’s help to face it!

God loves it when you are weak and He’s strong. Depend on Him to help you get that long-put-off-task done. Ask Him for the help, guidance, and the wisdom you need to get ‘er done.

And be open to who God might bring your way to help you like a coach, mentor, or friend.

Bookkeeping is still not my favorite task. But staying on top of it – that makes it doable and it makes life less stressful! It feels amazing to no longer have that hanging over my head and weighing me down! Investing the time up front has been well worth the effort!

What have you been putting off?

This post has been updated and revised just for you!