Are You An Elephant or A Hippo? 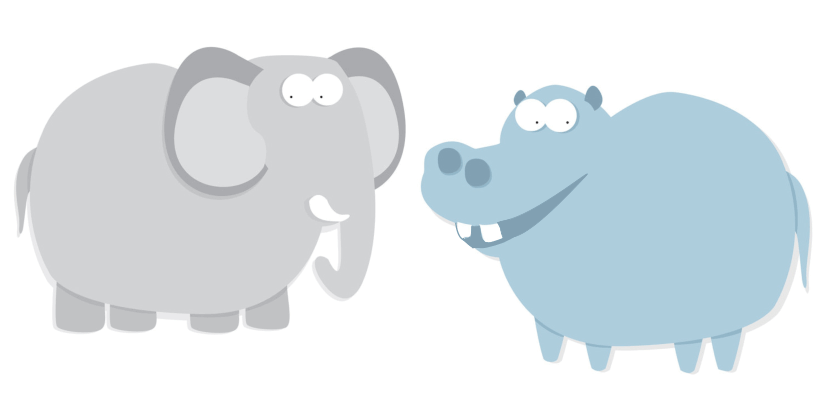 Not all leaders are effective leaders. They may have the title, but that doesn’t mean that others are following, because some leaders are like elephants, and some are like hippos. Which kind of leader are you?

Despite how you might feel about leading, we need leaders! They keep their team focused, motivated, and positive while pursuing the right goals. Leaders are essential in the midst of change, and vital in cultivating innovation!

Maybe you aren’t a leader in the typical sense. That doesn’t mean you can’t be influential. You might be surprised at the pull you have in your circle! And, even if you don’t lead others, you have the responsibility of leading yourself. We all do!

Both elephants and hippos are among the largest land mammals and are considered dangerous. They have similar characteristic such as being hairless and having tusks. The males of both species are called bulls, the females are cows, and their young are calves.

There are also some striking differences between the two!

Elephants are social, friendly, and very intelligent. They have a reputation for being caring and sensitive. An elephant has the remarkable ability to remember elephant friends and locations over several decades. Reports of elephants that have not crossed paths for 23 years remembering each other are not out of the ordinary.

Physically, elephants have large ears. African elephants can have ears of up to 21.5 square feet. To enhance their hearing, elephants use their ears to funnel in sound waves from their environment and are able to hear lower frequencies that humans are unable to hear. Unlike us humans, elephants also use their feet to listen to sub-sonic rumblings.

Elephants also use their ears as cooling devices and are able to lower the temperature of their bodies by five degrees by cooling the blood in the veins of their ears.

The elephant’s trunk is more than just a nose. It is a tool to grab food, communicate, drink, and caress their young.

Hippopotamuses on the other hand are aggressive in nature, often fighting daily. Did you know that they are considered one of the 8 most likely animals to kills you? It’s been said that the deadliest place in Africa is the space between a hippo and the water. They kill about 2900 humans each year!

The males will display their gigantic teeth, often 20”-28” long, and use their mouths as sledgehammers. Their mouths can be as large as 4 feet wide and are able to open 150 degrees. That’s a big mouth!

While they have excellent hearing, their ears are tiny.

Curious about whether you Lead like an elephant or a hippo?

Want to be more of an “elephant-like leader”? Here’s how:

Challenge yourself. Pause ten seconds before responding and sharing your thoughts. Work on being a more empathetic listener. Ask clarifying questions. Focus on what the other person is saying. Don’t jump to conclusions – question your assumptions.

2. Watch Your Words and Tone

Your words might suggest one thing, but your tone might convey something negative. Pay attention to the way you communicate.

No one knows everything. There’s more to learn and plenty of areas to grow and develop. The finest leaders not only take in information, they also digest it and actively apply it to their lives! Elephant-like leaders are eager to learn.

4. Notice the Needs of Others

Observe – pay attention to what’s going on with the people you lead. Invest the time to care and understand the needs of those around you. It will make you more of a person that others want to follow, builds trust, and strengthens relationships. Just like elephants use their noses to sniff things out, they also use it to display affection for their young.

A strong and powerful personality is part of what makes people leaders. At the same time, learning to temper this power and maintain harmony is a treasured trait.

A collaborative approach to leading, finding solutions, and reaching goals is more effective than any one man show. Be a leader who works well with others, asks amazing open-ended questions that encourage creative thinking, and invite others to use their strengths to help the team reach your goals.

The truth is that none of us are 100% elephant or 100% hippo. Most of us are “elepotamuses” or part elephant and part hippo!

Chime in! What steps do you need to take to be a more elephant-like leader?

Originally posted in July 2104, and it’s been a favorite! It’s been updated and revised just for you!